In winning the Delivery Innovation Award Forterra wanted to address safety issues around drivers working from a height when securing loads. Logistics Manager Editor Christopher Walton finds out how they did it. 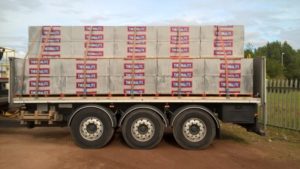 Securing loads of its aircrete block product used to pose a working at height risk for Forterra. Due to the product’s light weight, loads are stacked up to four high on the vehicle bed, which until fairly recently meant that the driver had to stand on top of the high load in order to roll out netting, making it a hazardous activity.

Forterra devised a system using spacers and straps to separate packs or pallets, but this too required the driver to put spacers in place while working in close proximity to a clamp truck.

“We need to protect the product to stop it from falling off the trailer,” says Manning of the approach. “But we improved the packaging in the factory, so everything is encapsulated in plastic. But it meant that the guys still had to climb on the vehicle, but not on the load. We reduced the working at height risk but our next step was to stop them from climbing on the back of the vehicle.”

This meant finding a way of getting rid of the spacers. Its own drivers and loaders at its Thatcham depot came up with the idea of removing the need for spacers by finding the best way to configure the loads on the vehicle. Two rows of packs on the bed with a single top row loaded centrally offered the best solution.

“We can load the vehicle without the necessity of getting out of the vehicle,” says Manning. “That reduces people interacting with plant. They don’t have to climb on the vehicle or stand on it when the load is presented on the back of the truck. You pull out of the loading zone and into a strapping zone, where forklifts aren’t allowed, to put the load restraint system on.”

Forterra also had to train its forklift drivers and HGV drivers – some 180 in total to make sure they were comfortable with the configuration of the load. Manning says that getting buy in was not a difficult process: “The guys in their 50s who have been here 20,30 years, when you say to them you don’t have to walk around the site in the pouring rain stacking up wooden pallets. That’s a big win. They do not get out of the vehicles. They can sit there in the warmth with their phone hooked up to the Bluetooth.

Forterra has saved around £100,000 per year in material costs: “We now have that in the bank, which is great, but there is the environmental benefits too of not using wooden pallet spacers and nails, and not using trucks to go and collect them and bring them back… it all helps to reduce our carbon footprint.”

Finally, Forterra is no stranger to winning awards but this one, Manning says, is different, so much so that the picture of him punching the air in delight when rec ieving the award on stage is on the wall of his office: “We do enter awards, but it’s for products not for logistics. We won 13 awards at the brick Awards for making different types of bricks. Our customers know we’re pretty good at making bricks! Now we can now say to our customers we are pretty good at delivering them!”

The 24th Supply Chain Excellence Awards will take place on 12 November 2020. For more information, including how to enter and sponsorship opportunities, and to register your interest go to: Supplychainexcellenceawards.com

Boohoo terminates contracts with suppliers in wake of pay allegations